By Jamie Pyatt In South Africa For Mailonline

This is the moment terrified eco-students were forced to run for their lives after a six-ton sex-crazed bull elephant charged their jeep while on a tour in South Africa.

Trainee guides were being driven through Selati Game Reserve on the edge of the Kruger National Park in South Africa on Sunday when they were charged by a bull elephant in ‘musth’ – a state of sexual aggression that occurs during mating season.

Video captured the moment their open-topped car was being driven down a narrow dirt road when the bull charged out of the undergrowth, trumpeting and pawing the ground before smashing into the side of the vehicle and lifting it off the road.

More footage captured from the car behind by EcoTraining guides reveals how the car was turned sideways by 13ft elephant – sending three female students running for their lives. 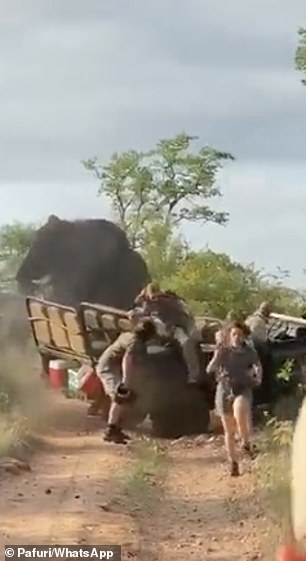 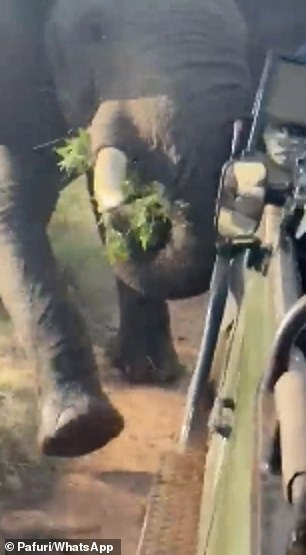 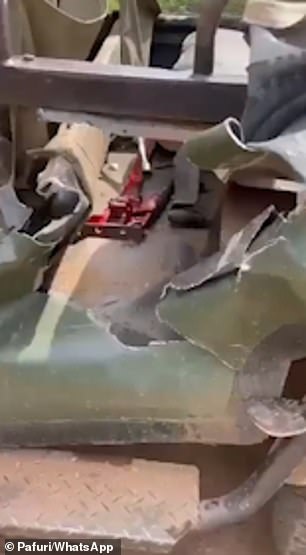 The six-ton male elephant pierced the vehicle with his tusks before lifting it up and shunting it off the road (left), easily tearing through the metal bodywork (right)

Images taken of the vehicle after the attack shows how the elephant’s tusks had punched through the metal bodywork and shredded it with ease, crumpling the side of the vehicle and leaving the front passenger seat bent and broken.

The terrified trainees were taken back to the safari lodge where they were given counselling for the shock, but were otherwise unharmed.

Staff had to abandon the vehicle and only went back to retrieve it later after the elephant herd had moved away.

It is thought the elephant which attacked was the breeding male of the herd, and became enraged when the trucks veered too close to his females.

When bull elephants are ready to breed they enter a state of sexual aggression called musth where testosterone levels in their bodies can multiply by up to sixty times.

This also causes them to become territorial, aggressive and can provoke acts of extreme violence – both aimed at rivals and anyone else unfortunate enough to cross their paths.

Captive elephants which enter musth have been known to turn on their keepers and kill them, while wild elephants that wander into villages while in the charged state are thought to trample around 500 people a year.

The students were taking part in a course at EcoTraining, a South African school which teaches tour guides and ‘nature guardians’.

EcoTraining is based at the 18,000 acre Selati Game Reserve which is home to 135 elephants as well as black and white rhinos and lions, leopard and cheetah. 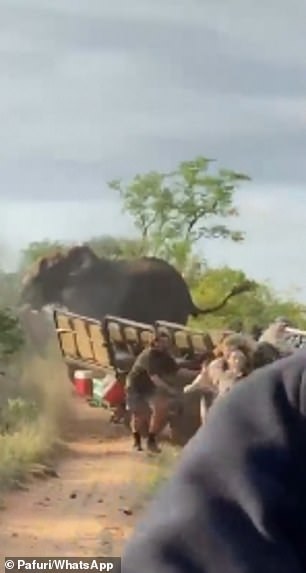 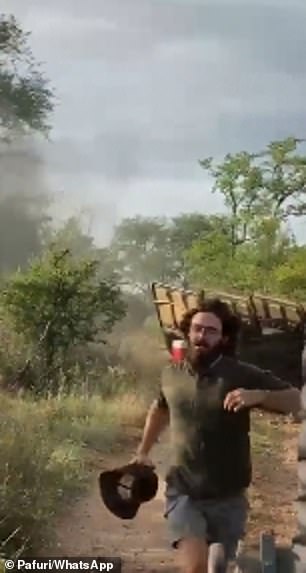 Safari instructors ordered the trainee guides out of the vehicle (left) before escaping themselves (right). Fortunately, nobody was hurt 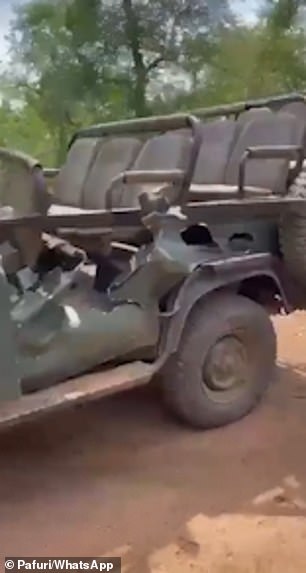 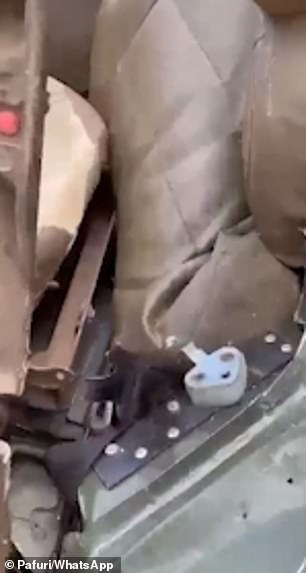 The vehicle was heavily damaged in the attack (left), which left the front passenger seat buckled and broken (right) – though luckily it was empty at the time

Managing Director Anton Lategan said: ‘On a routine activity EcoTraining instructors and trainees came across a breeding herd of elephants and stopped to allow them to settle down,

‘An elephant bull, who was with the breeding herd, mock charged the vehicle.

‘The elephant bull mock charged again, when they moved forward slowly, and then made direct contact with the game drive vehicle and displaced it off the road.

‘Once the vehicle had come to a standstill the trainees were moved to the second vehicle parked in close proximity by instructors with 25 years of experience’ he said..

The General Manager of Selati Game Reserve Bryan Havemann said,:’Although the vehicle was badly damaged thankfully none of the people on the vehicle were injured.’

The footage captured by an eco-student on the second safari truck has gone viral.

In 2018 a top safari ranger Mark Lautenbach, 33, was trampled to death by a sexually-charged bull elephant that had broken into a game park lodge on a rampage.

Mark had tried to move the angry elephant which was in full musth away from a tourist area at the Leopard Rock Lodge on the Madikwe Game Reserve by the Kruger.

Mark causing ‘extensive injuries’ and trampled him to death out in the bush.

Elephants live up to 70 years and at 25mph can outrun a human if it attacks and the only advice to escape is run in a zigzag and try and get being trees or boulders. 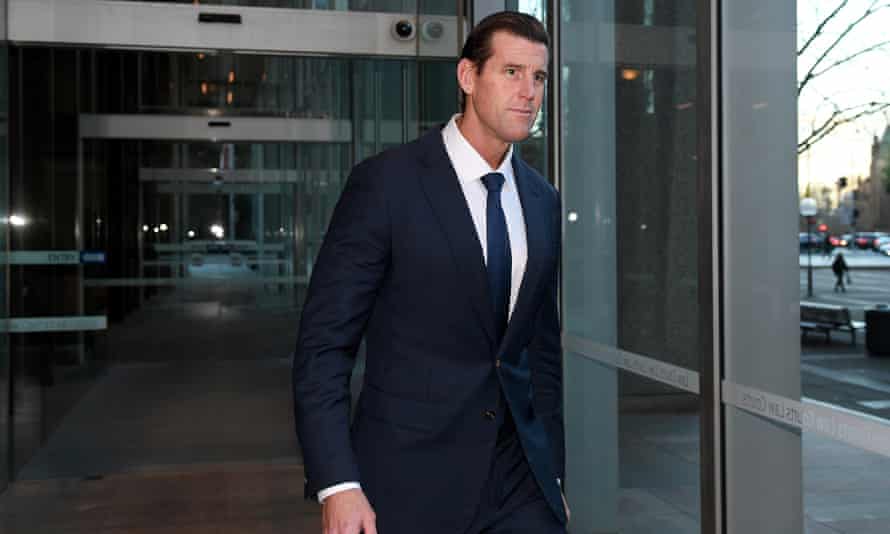 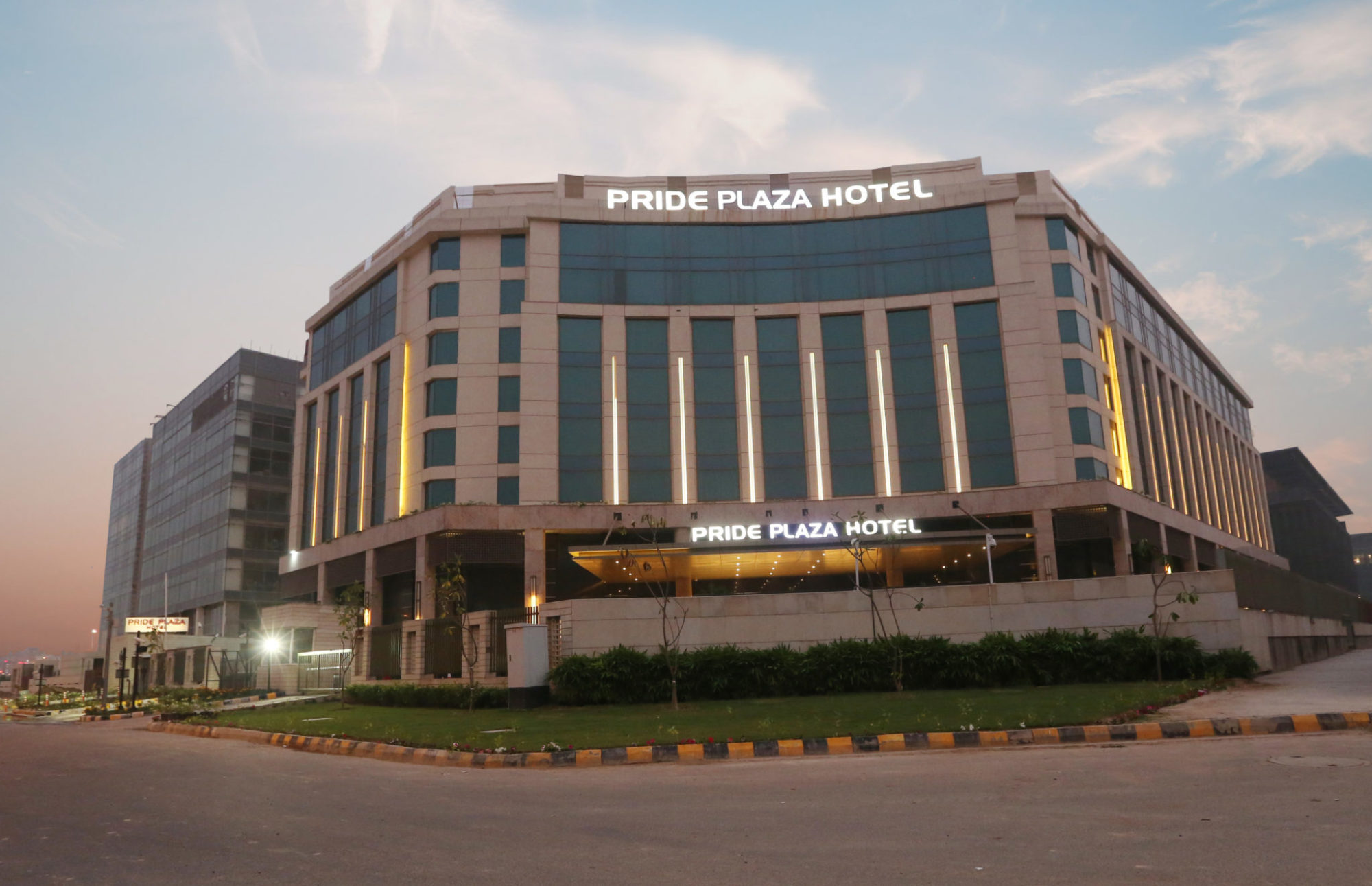