By David Averre For Mailonline

A man dressed as a ninja has attacked two female police officers with a katana sword in northwestern France after crashing a stolen car during a police pursuit.

The ninja, who crashed the stolen Citroen C3 into a service station in Tourlaville on the outskirts of Cherbourg, leapt from the car brandishing a katana and descended on the two female police officers who had given chase.

Both officers sustained blows to the head – one on the chin and one in the face – from the blade-wielding maniac, before he was shot by a third officer who fired from inside the police car at near point-blank range.

The officer fired three shots which struck the ninja in the abdomen and allowed him to be pinned down and incapacitated.

The ninja has since been transported to hospital in a serious condition, along with the two female officers whose injuries are not thought to be serious.

A police spokeswoman said there were no immediate signs that the assailant had a terrorist motive.

Officers who searched the stolen vehicle in the aftermath of the incident discovered the assailant was in possession of a full arsenal of weapons including multiple swords, a bow and crossbow, and ‘throwing stars’ – sharp projectiles that can be launched by hand at a target. 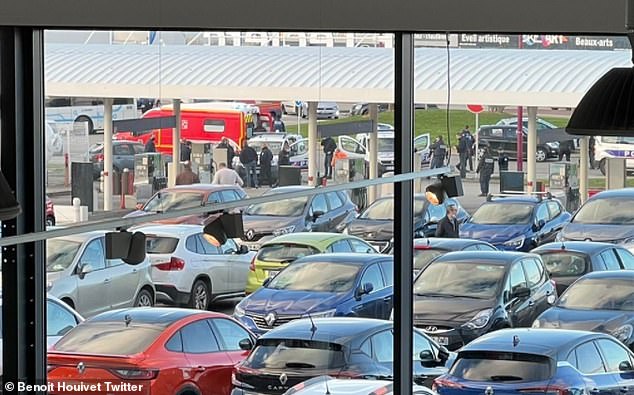 An image posted on social media shows the scene of the crash and resulting sword attack in which two female police officers sustained head injuries. The assailant, dressed as a ninja, was shot three times by a third officer and is in a serious condition. 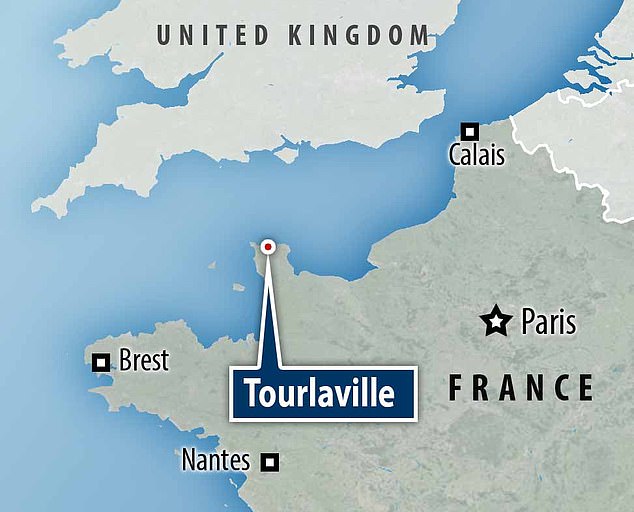 The attack took place after the assailant crashed a stolen car at the Leclerc service station in Tourlaville, Cherbourg, northwestern France

The saga began when the police officers spotted a grey Citroen C3 that registered as a stolen in the Malakoff district of Cherbourg.

They began to follow the car, which took off in an easterly direction towards Tourlaville on the outskirts of Cherbourg, prompting the officers to give chase.

After a short pursuit, the driver of the C3 lost control and crashed at Tourlaville’s Leclerc service station at around 3:45pm.

The officers were approaching the car when the driver, who they had intended to apprehend, turned out to be dressed in a ninja suit and armed with what appeared to be a katana.

A katana is a long, curved sword used by the Japanese samurai from the 12th – 19th centuries.

The assailant swung the blade at both officers, hitting one in the chin and another in the face as they attempted to apprehend him and was only arrested when a third officer, who was also sat in the police car, fired three shots from close range. 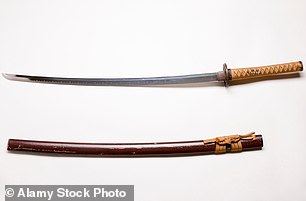 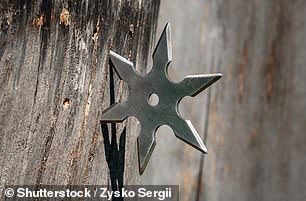 The assailant attacked police officers with what appeared to be a katana – a long, curved sword used by the Japanese samurai from the 12th – 19th centuries (file pic left). Officers who searched the stolen car after the incident found several weapons including ‘throwing stars’ – sharp projectiles that can be launched by hand at a target (file pic right)

The incident prompted a major response from French law enforcement, and by 4:15pm the service station had been completely sealed off as scores of police, ambulance crews and firefighters descended on the scene.

The two policewomen, who according to a police statement were in shock but not seriously injured, were taken to the nearby Cotentin public hospital in Cherbourg.

Meanwhile, a helicopter arrived on the scene to stabilise the assailant and transport him for further medical treatment.

The police spokesperson said the ‘ninja’ was in a serious condition after being shot in the stomach and held down by officers.

The identity of the assailant has not yet been revealed.