“The Masked Singer has never even played in this league!” Nicole Scherzinger marveled. “This feels like the season finale, and it’s just Group A!” her fellow judge Ken Jeong exclaimed. And Robin Thicke noted, “This is insanely competitive. These might be the closest competitors we’ve ever seen!” This all took place during Wednesday’s Masked Singer Group A finals, which focused solely on two of this year’s best contestants, the Bull and Skunk — with only one of those mystery singers moving on to Season 6’s actual finale.

And Nicole, Ken, and Robin weren’t kidding. In no other season could someone as talented as Robin’s favorite Season 6 contestant, the Skunk — a.k.a. the First Lady of Bad Boy Records, Faith Evans — go home in fourth place (in what host Nick Cannon said was one of the closest votes in Masked Singer history). And this happened right after her knee- and jaw-dropping rendition of Aretha Franklin’s “I Never Loved a Man” had Jenny McCarthy-Wahlberg predicting that the Skunk “could be our next winner!” (Perhaps nothing about this season should surprise me anymore — after all, Toni Braxton didn’t even make it past episode 2!)

Once Faith was unmasked, the judges understandably bowed down in reverence, and Robin, who’d guessed her identity correctly, told her, “Honestly, you know how I feel about you, Faith. Every time I see you out, there’s just nothing but outpouring love and appreciation and gratitude. I’ve said it every time she sang. The goosebumps, the soul, the passion — you are and will always be one my favorite singers ever.”

Faith seemed thrilled to be back on a stage, despite the fact that she’d missed making the finale, explaining that for years she “really hadn’t done nothing except for be a mom” to her 14-year-old son, who is on the autism spectrum. “This was my first time actually saying, ‘OK, I’m gonna actually do something.’ … I reminded myself that when it’s time to do what I gotta do, I gotta make it do what it do!”

Faith also got emotional remembering the last time she saw her ex-husband, “the late, great Christopher Wallace,” a.k.a. the Notorious B.I.G. — a moment that was referenced in one of the Skunk’s early clues packages. “We were at the same party, and we were separated at the time, and, you know, just kind of being immature. And I knew that we were supposed to go to an afterparty, so I’m like, ‘Well, I’ll speak to him then.’ And on the way to that party is when I got news that I should go to the hospital, because something happened to him.”

“We truly appreciate you sharing that story. Your passion, your pain, and your heart with us,” said Nick, as Faith belted “I Never Loved a Man” one last time.

Although only two celebrity cosplayers competed this week, Wednesday’s episode was action-packed. Along with her Aretha cover, Faith pulled off what Nicole described as a “classic performance”: an “Ain’t No Mountain High Enough” duet with none other than (an un-costumed) Michael Bolton. Amusingly, Michael had no idea who the Skunk was, even though he had Faith had actually performed together in the past. But the epic number — the first time there had ever been guest duets on The Masked Singer — still had Jenny proposing a Bolton/Skunk world tour.

As for the Bull, he finally whipped out his much-hyped “secret weapon” — his acrobatic dance moves — for his intricately choreographed, Vegas-meets-Old Hollywood solo performance of Paula Abdul’s “Straight Up.” The tour de force had Ken straight-up declaring him “the most entertaining performer we’ve ever had on the show, for real!” The Bull then teamed with former contestant Jesse “The Turtle” McCartney for a beautifully blended duet of the Script’s “Breakeven.”

Jesse was also stumped regarding his duet partner’s identity, but he joked that he could tell this wasn’t the Bull’s “first rodeo,” and he raved, “He’s amazing. I think he’s gonna go all the way.” Jesse’s prediction, unlike Jenny’s, might be the one that comes true. The Bull isn’t breaking even this season. He’s really grabbing this competition by horns.

But while the Skunk’s true colors have now been revealed, who is the Bull? I think it’s extremely obvious that it’s American Idol alumnus-turned-YouTuber-turned-LGBTQ icon Todrick Hall. All of the past weeks’ clues have added up: the “small town surrounded by cows” (he’s from Plainview, Texas), Walt Disney Hall (he’s a known Disney obsessive), Forbes magazine (he been a Forbes “30 Under 30” honoree), Broadway (he has starred Kinky Boots and Chicago), his reputation for throwing huge soirees (his last concert trek was called the “Haus Party Tour”), etc.

This week, it became even more clear. We got a shoutout from Glee actor Matthew Morrison (who co-starred with Todrick on the British talent show The Greatest Dancer), we saw a checkered flag (clearly a reference to another talent show that has regularly featured Todrick, RuPaul’s Drag Race), and the Bull opened up about a supposed “big break” that turned out to be a miserable experience (presumably his ill-fated association with controversial former manager Scooter Braun). He also talked at length about how his career only took off after he stopped trying to fit in and allowed his freak flag, checkered or otherwise, to truly fly — sentiments that Femuline singer Todrick eloquently expressed in a recent Yahoo Entertainment interview. So, no bull here: The Bull is totally Todrick.

And now the Bull will be charging straight to the Season 6 finale, facing off against one of the two remaining Group B finalists. That sure-to-be-sensational showdown will take place Dec. 15, but next week we find out if the Bull’s finale opponent will be the Queen of Hearts (who is totally Jewel) or twosome the Banana Split (which is totally another Idol veteran, Katharine McPhee, and her husband David Foster). See you then. 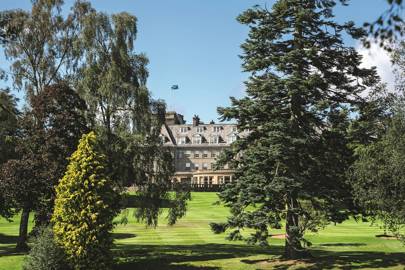