The event was held at the Juniper Hall in Paddington, Sydney, and featured opening remarks from one of the three judges, the artist Tim Storrier, who won the $150,000 prize in 2017. “Some judges are more stubborn than others, some are better informed,” he said. “In this case I don’t know what it was, but we decided that we couldn’t make a decision.

“There are going to be people that disagree with the choices. There always are. But one can’t criticise the generosity of the Moran foundation … that’s three Archibald prizes in one day!”

The prize – which was cancelled last year due to the pandemic – invites original works from Australian artists “capturing Australians from all walks of life”. It distinguishes itself from the Archibald prize by not only its money, but its judging panel, which is smaller and weighted towards artists and curators.

In 2021 all three winners – Vincent Fantauzzo, Andrew Greensmith and Michael Vale – are from Melbourne, with two of the artists crediting in part the city’s record-breaking 262 days in lockdown, over the past two years, for their success.

Vale said he had painted Our Ghostly Crew – featuring himself, his wife, the film-maker Donna McRae, and their dog Pancho (now deceased) – during Melbourne’s first lockdown last year.

“I’m very lucky I have a home studio, and Donna was very obliging,” he said.

“We’re both very keen on horror and the supernatural, so we agreed [the portrait] should have a slightly gothic feel to it. A combination of having a beautiful model and a vivid imagination meant I could let loose.”

Fantauzzo also paid tribute to his wife and sitter, the actor Asher Keddie, who was present at Monday’s ceremony.

“I guess we both had a lot of of time on our hands, with all the lockdowns,” the artist told Guardian Australia.

Appropriately titled Muse, the portrait is about the sixth Fantauzzo believes he has painted of his wife over the past decade. “Obviously she gets dragged into this all the time,” he said.

The artist won the Doug Moran in 2011 for his portrait of Baz Luhrmann, and he has won the Archibald people’s choice four times – once, in 2013, for another portrait of Keddie. He is also known for his 2017 official portrait of former Labor Prime Minister Julia Gillard.

The artist, who is also one of Melbourne’s leading plastic surgeons, said it was a deeply moving experience being in the presence of “two ordinary citizens who had been through extraordinary life events”.

“There was pathos in their faces – and in my line of work I am very interested in faces. I do think people wear their lives on their faces.”

The twins were subjected to medical experiments by Dr Josef Mengele in Auschwitz from 1943 until its liberation in 1945. In 1962 the Prague-born sisters and their families moved to Melbourne.

Greensmith’s Two Lives One Soul portrait includes a painted photograph of the twins’ with their mother and younger sister, neither of whom survived the Holocaust.

The artist completed the portrait just months before Stephanie died in September 2019, at the age of 95.

Storrier judged the Moran prize with Dr Peter Moran, the son of Doug Moran, and curator Daniel Thomas, the emeritus director at the Art Gallery of South Australia. Thomas said the number of entries directly referring to contagion and lockdown was notable this year.

“But we became aware of a more general emphasis on the intimate life, of family at home, of love and friendship,” Thomas said.

“Of course, a few portraits of beautiful or important people occur among the 30 finalists. However, we found most of the selected portraits constituted a wonderfully ordinary survey of all-Australian diversity, many old and plain and modest, but intensely individual and emotional.” 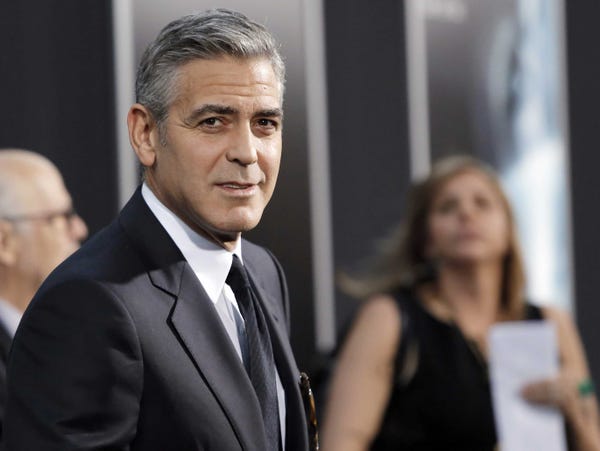 George Clooney Says Hollywood Is Changing ‘in the Right Direction’