Andres, from San Diego, Calif., apparently watched a film about Jean-Michel Basquiat and told his father, “I can do that.”

So his dad, attorney Guadalupe Valencia, bought him large-scale canvases during the pandemic. And the result is that Andres’ work is now featured at Chase Contemporary’s booth at Art Miami, which runs through Sunday.

Andres is self-taught, having created his first painting at 4. He’s inspired by Cubism and completes his large-scale works using a ladder.

His collection already has an offer from a New York-based collector, according to Nick Korniloff, Art Miami’s director. “We work with young artists all the time, but this one is special,” Korniloff told The Miami Herald.

Some of the proceeds from sales will benefit the Perry J. Cohen Foundation, named for Korniloff’s son, Perry, who was tragically lost at sea at age 14 in 2015.

Andres — who names George Condo and Picasso as his favorite painters and met with Shepard Fairey this week — will paint live at the fair on Saturday at noon.

He told the Herald the best thing about being an artist is, “You can express your feelings and stuff on canvas.” 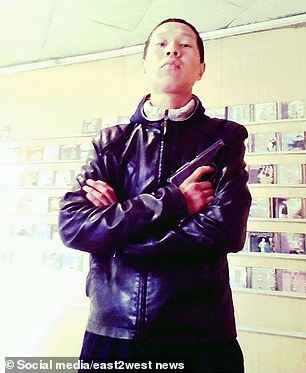 TravelGuides – Russian man throws girls, nine and 14, 80ft to their death from window as they were being too noisy