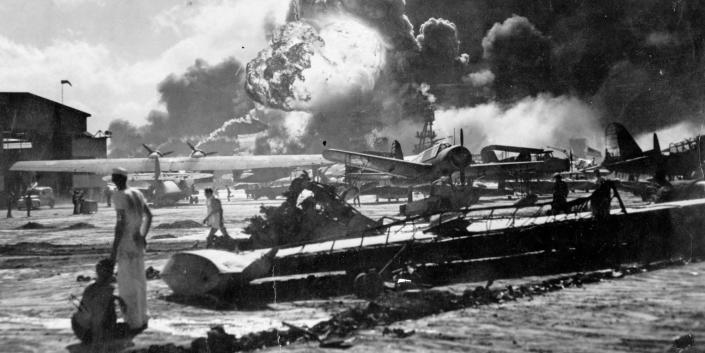 Tuesday is the 80th anniversary of the Japanese attack on Pearl Harbor, which killed 2,400 civilians and sailors, wounded nearly 1,200 Americans, and damaged or destroyed 19 naval vessels and 328 aircraft.

It also thrust an ambivalent nation into World War II.

Stories abound of young men joining up after Pearl Harbor. But how did US troops respond when they learned of the attack?

Thanks to an Army survey program launched the very next day, we know what was on the minds of GIs in the Army’s Ninth Infantry Division, which was stationed at Fort Bragg in North Carolina, the US’s largest military installation.

President Franklin Roosevelt’s declaration of war on Japan on December 8 may have braced many Americans for the fight ahead, but the concerns of most men of the Ninth, it appears, had little to do with events in Washington, DC, or in Hawaii.

In fact, getting US troops to take the Imperial Japanese Army seriously was more difficult than some histories of the Pacific war would suggest. 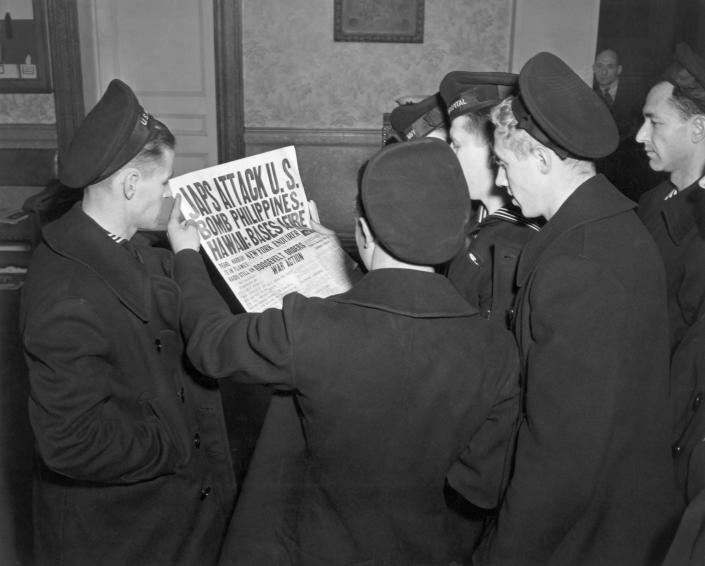 Sailors on leave read about the Japanese attacks on Hawaii and Philippines, December 1941.Bettmann/Getty Images

The timing of the survey was purely coincidental. A special study group in the US Army Intelligence Division began developing the questionnaire used at Fort Bragg well before Japan’s attack.

Scientific opinion polling of the American public was new but rapidly increasing before the war. It wasn’t easy to get approval to poll US soldiers — in fact, it almost never happened.

Elmo Roper Jr., a highly respected and pioneering pollster, offered the War Department his services. Not only was he turned away, but Secretary of War Henry Stimson prohibited polling outright.

For an Army dependent on cohesion, anonymous criticism could only be “destructive,” explained the curt press release publicizing the ban.

But surveying personnel about their needs, behaviors, and attitudes seemed prudent to Frederick Osborn, a former corporate executive who was helping the military provide morale services to troops.

Osborn was an advocate of the social sciences. More decisively for his efforts, he was a childhood friend of Roosevelt. When the chief of the Army Morale Branch stepped down for health reasons in early August 1941, Osborn was tapped as his replacement.

An “over-night General,” Osborn quickly facilitated a $100,000 grant from Carnegie Corporation, where he was a trustee, to recruit top-notch psychologists and social scientists without putting them on the Army’s payroll. 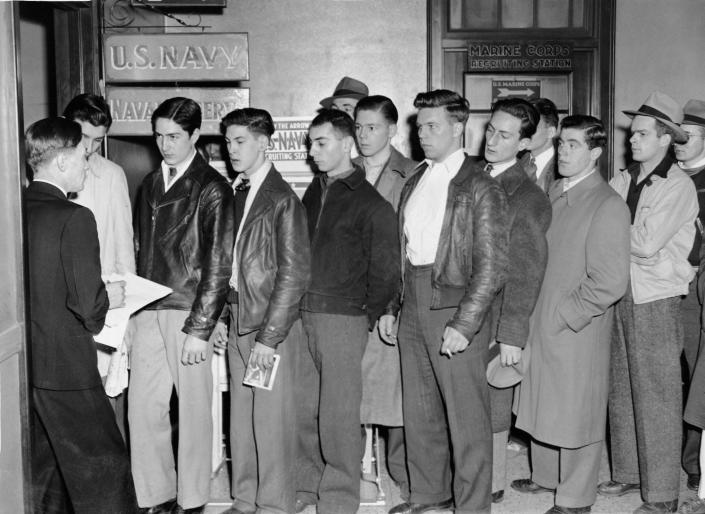 Polling was still banned, but Osborn received approval for a more benign “survey” of soldier morale, called Planning Survey I.

Stimson would not have approved had he known, and the Ninth was selected only because a commanding general elsewhere refused to cooperate.

The new research team scrambled to conduct the survey, worrying that holiday furloughs might delay it.

On December 2, Fort Bragg’s commanding general approved, and within two days the team was selecting soldiers for the survey, scheduled for December 8 to 10, and training a small group of other enlistees as “class leaders” to help administer it.

The team was doing final training with class leaders and interviewers when news of the attack flashed across the radio. In a second, they knew some questions were now useless.

The team completed the survey by the night of December 10, using four recreation halls, a theater, and several day rooms for interviews. Study director Samuel Stouffer started analyzing the 1,878 questionnaires that evening. He would hardly sleep during the following nights.

Eighty years after Pearl Harbor, the soldiers’ handwritten and multiple-choice responses are available for the first time, thanks to the American Soldier in World War II project, which has collected and transcribed 65,000 pages of uncensored commentaries.

What was on soldiers’ minds 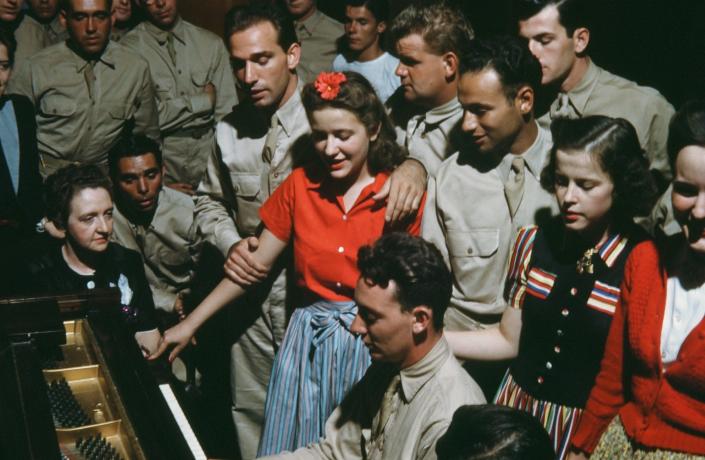 Some respondents felt exactly how we’d imagine they’d feel when they learned of the Japanese attack.

“Now that Japan has started the war, and the U.S. has declared war, every America Soldier will do his utmost to win this war, and America will win, So help us ‘God,'” wrote one GI.

Judging from the remarks of the 1,030 men who responded to the open-ended prompt on the last page of the survey, the US declaration of war was less than transformative.

A few soldiers mentioned Japanese soldiers. “I do not believe there is one man in this army who would back away from any Jap & I know we will die fighting,” another enlistee wrote.

Hardly any called for swift retribution, much less expressed the level of racial animus that histories of the US war with Japan have emphasized.

As they were more likely than other Americans to face combat, few of the soldiers appeared eager for war.

“Don’t, for God’s sake, take away furloughs right now. Don’t get excited about Japan. Be calm and remember that we need furloughs more so now than before. To take away all furloughs now is not needed in this division yet—war organization will take time—and we don’t want AWOL’s,” cautioned another respondent.

Like this soldier, most men wrote about more immediate personal needs and desires — furloughs, passes, and whether they’d get to go home and life on the base and amenities (or lack of thereof) in Fayetteville, the nearest town.

The vast majority wrote about the Army itself and what they thought it was doing wrong. 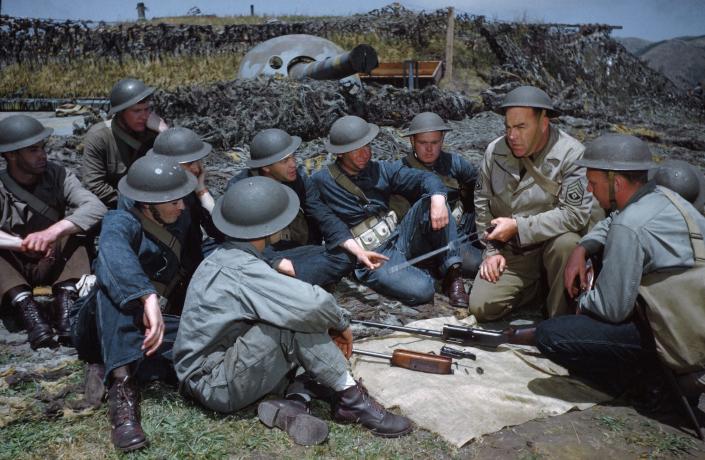 The US government invested heavily in racist propaganda during the war that portrayed the Japanese as brutish. That effort is partially explained by a trend in the Army’s survey data that troubled the General Staff: Too many GIs did not consider Japanese soldiers all that formidable, even after they defeated the US in the Philippines.

American troops massing in England for the November 1942 invasion of North Africa were asked to rank the fighting ability of Allied and Axis soldiers. Russians were believed to be the best, followed by Germans. They ranked Japanese soldiers sixth in a list of eight.

Army Chief of Staff Gen. George C. Marshall — dismayed after reviewing a secret research report on the survey — wanted the details of the fighting with the Japanese on Bataan to be more widely distributed to illustrate “their toughness, tenacity of purpose, utter willingness to die, refusal to surrender—a general ruthless purpose which only great determination and skill can conquer.”

Using all the media at its disposal — orientation and information films such as the “Why We Fight” series, short-wave radio programs, servicemen’s newspapers, pictorial newsmaps, and graphic posters — Marshall’s staff redoubled its efforts to change attitudes. 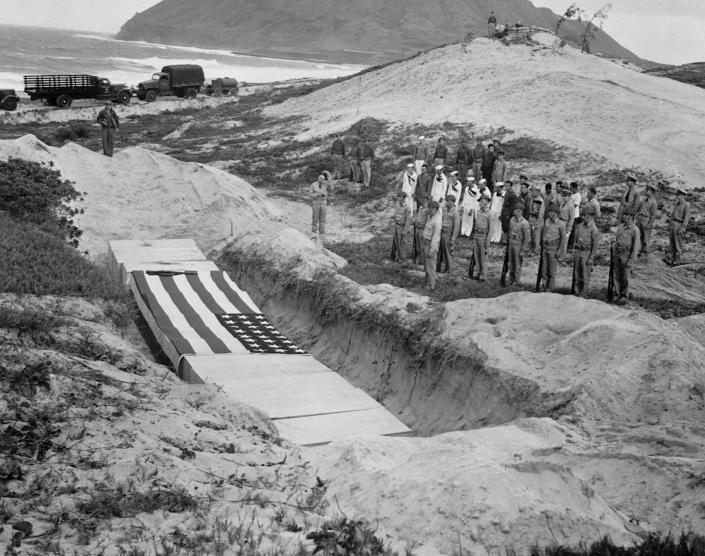 Military personnel pay respects beside the grave of 15 officers and others killed in the attack on Pearl Harbor on December 7, 1941.CORBIS/Corbis via Getty Images

Whether the Army’s efforts to change perceptions worked is an open question.

Soldiers were asked later in the war how much they relied on thoughts of hatred of the enemy when the going was tough. Of soldiers in the Pacific, 38% responded indicated “a lot.” Only 27% in Europe said the same.

Soldiers may have cultivated hatred of the Japanese to cope and endure. Yet when the veteran infantrymen of the Pacific and European theaters were asked if the Japanese people should suffer after the war, GIs in Europe were more inclined to say yes, while those in the Pacific were not.

Of infantrymen in Europe, 58% wanted the Allies to “wipe out the whole nation” of Japan when it was all over. Only 42% of Pacific GIs, still a large share, said the same.

Some had gained the appreciation Marshall wanted them to have.

“There is something I hate to admit, but we did not win our battles because the Americans was better than the Japs. On the contrary, the Jap had it all over us, both Officers & men. It was our superiority in strength & equipment,” confessed a combat infantry stationed in the Mediterranean.

Edward J.K. Gitre is an assistant professor of history at Virginia Tech and director of The American Soldier in World War II project.

Travel Guides – Will Smith says he borrowed $10,000 from a drug dealer after he went broke from not paying taxes

Travel Guides – A Chinese millionaire said he withdrew $780,000 and made bank staff count the notes by hand after security guards were rude to him