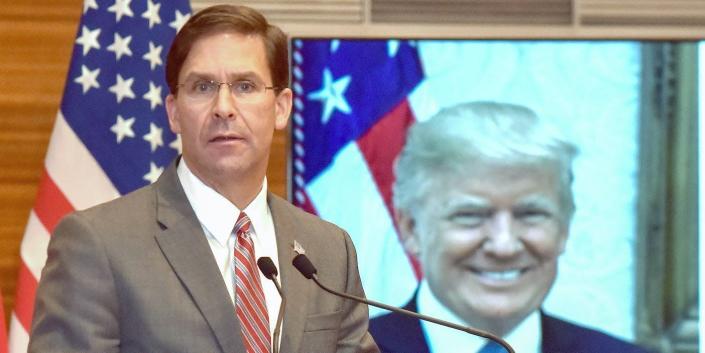 In his new book, former White House Chief of Staff Mark Meadows accuses former Defense Secretary Mark Esper as the source of several major leaks from inside the administration.

“In the months to come, I would find out that the situation in the White House was worse than the whispers and leaks had suggested,” Meadows writes in “The Chief’s Chief,” released on Tuesday. “There was covert insubordination and a stunning lack of coordination—not to mention that every few hours, there seemed to be a major leak to the press.”

Meadows — who has described revelations in his own book regarding Trump’s COVID diagnosis as “fake news” — writes at length about his distrust of top military officials, and describes Esper as a leaker shortly after introducing him in the early stages.

“No matter what anyone said, generals were politicians at heart, and the generals around President Trump were clearly swinging toward the radical left,” Meadows writes. “I had been in several meetings where secret details had leaked to the press, and it was clear that Mark Esper was the culprit.”

Meadows does not specify what kind of “secret” information he believes Esper leaked, or if it was classified. He also doesn’t present any evidence to back up his claims.

Under the Espionage Act 0f 1917, leaking classified information is punishable by up to 10 years in prison.

Representatives for Epirus, an aerospace technology company where Esper is a board member, did not return Insider’s request for comment ahead of publication.

Instead of elaborating on Esper’s alleged leaking or providing any further details, Meadows uses his introduction of Esper and other top military officials for a segue on “woke” generals.

“But there was another battle coming between President Trump and his newly ‘woke’ military advisors, and it had nothing to do with funding,” Meadows writes, alluding to the military operating as a so-called deep state thwarting Trump’s will.

Esper, for his part, also wrote a tell-all book about his time in the Trump administration. In it, he recounts preventing Trump from sending the National Guard “with rifles and bayonets” from cracking down on anti-racism protests across the country in the summer of 2020.